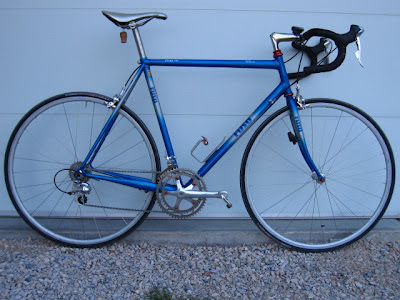 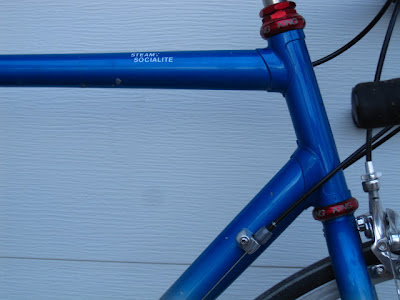 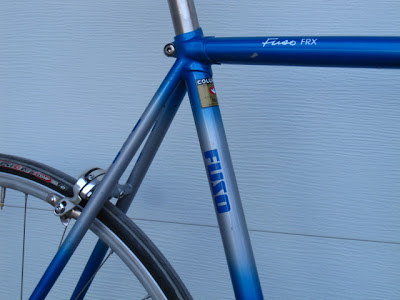 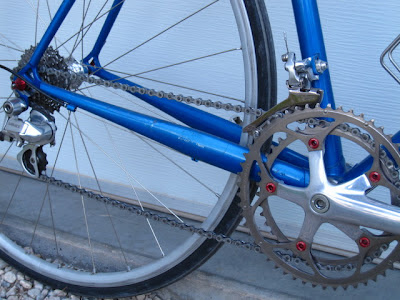 Note: Fuso FRX by Russel Denny; Denny was an apprentice of Dave Moulton.

About the Fuso branding in the words of Dave Moulton (edited): "My main competition at that time was the Italian import frames and I found the Fuso name when looking through an Italian/English dictionary. I came across the word "Fuso," Italian for "Molten" as in molten metal, a play on words on my own name. I designed a logo depicting a crucible pouring molten metal into a mold and the Fuso brand was born.....the original Fuso had less frills. The design and workmanship was the same, so the Fuso would perform the same as anything else I built. But to cut cost and keep it affordable there was no chrome or engraving and the decals were simple vinyl stick on type. The first Fuso introduced in 1984 did not have a model name because there was only one model....When the Fuso Lux was introduced in 1986 it was necessary to give the first model a name to avoid confusion. So it was then dubbed the FR1....Another Fuso model, the FRX was introduced around 1988. It did not replace the FR1 but was introduced as an additional model between the FR1 and the much higher priced Fuso LUX. (The 'X' was for the extra work that went into the finish.) The FR1 and FRX are essentially the same frame, the price difference was in the paint finish. In 1993 I decided to retire from the bicycle business. Russ Denny who had been my apprentice since 1985 took over the frameshop..."

This blog is dedicated to all things related to Columbus MAX, MXL and MINIMAX. If you have a contribution please email me at veronaman@gmail.com.

Email ThisBlogThis!Share to TwitterShare to FacebookShare to Pinterest
Labels: Fuso

Angelo senza la o
You can contact me at veronaman@gmail.com.